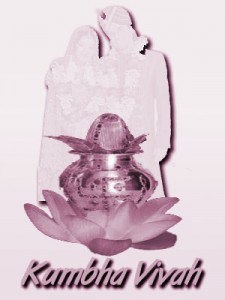 Manglik Dosh is of two types:

A) Anshik Manglik( Little Manglik)
This dosh generally ends after 18 years of age and can also be resolved by Puja or some rituals. This doesn’t effects too much but still suggested that Shanti puja must be performed so that it may vanish for ever.

A)After wedding major health issues.
B)Small disputes between bride and groom.
C)Delivery issues of baby.
D)Tensions in family.
B) Major Manglik Dosh:
This is highly negative in nature and has some deadly impacts on married life.If a human gets married to another with Manglik dosh then the Manglik Dosh of partner will surely effect other’s life.It has a single solution which is known as “Kumbh Vivah”. This is the only way which can end this Dosh and may give prosperity to both Bride and Groom even if one has Major Manglik Dosh.
Few examples of Major Manglik Dosh are:
A) Serious Relationship Issues after wedding.
B) Death of husband.
C) Death of Wife.
D)Major Accident.
E)Major Disease.
Kumbh Vivah is just like a normal wedding. For example if a girl has a Manglik Dosh then she has to perform this ritual. Everything would be like the real wedding. Girl has to wear the wedding dress and jewelery along with a thread. Parents do “Kanya Daan” and “Phere” are also taken with the Mud pot. Priest has to be invited to chant the Mantra’s and end up everything like a real human wedding. Later on the girl has to change the clothes, remove the thread and that thread is tied over the Mud pot and the pot later on is drown in some river or pond without letting some one know. Once the Ritual is done the girl is out of Manglik Dosh and she can now merry to the actual person and will not be having any further issues after wedding.Her husband is now safe from her Mangal Dosh.
Pot here plays the role of first husband of girl and hence it is a non living thing so as per the Indian Mythology this becomes null and void and the wedding with the Human is considered as her first wedding. Pot has taken all the Dosh or troubles of the Girl and hence the Mangal will not effect the other person anymore.

This Ritual is amazing in its own and I have seen many people who has got the benefit out of it.

Kumbh Vivah is done in order to minimize the ill effect of Mars. It is done when a person is manglik that is if a person has his/her Mars (Mangal) in 1st, 4th, 7th, 8th or 12th house of birth chart. If the Pandit has suggested you Kumbh Vivah it means you are Manglik & the guy is non- manglik. It is suggested that a manglik person should get married to a manglik spouse only, otherwise the non- manglik partner can suffer bad health, deterioration, ill fate, money loss or even death after marriage.

But there are certain Upayas (remedies) by which you can reduce the ill effects of Manglik Dosha. But remember there is no remedy in this universe by which one can eliminate the bad effects completely. All you can do is reduce them.

In Kumbh Vivah, the person performing this ritual is supposed to marry a ‘Mitti ka Ghada’ (clay pot)’& then later break it into pieces. It is believed that you married a pot, it becomes your spouse (temporarily) & later it died (as you have broken it). Once it has been done the bad effects of Manglik Dosha are reduced & now you can marry another person. Similarly there is Pipal Vivah & other so many other remedies for Mangal Dosha. For more info, you can Google “Kumbha Vivah”.

The term ‘Manglik’ is looked upon with fear and a bit of exclusion in Hindu society. Usually people who have the Mangal dosha in their horoscope are called Manglik. A person who is born under the influence of the planet Mars can be called a Manglik. For such people Mars is the ruling planet. Now we all know that Mars or Mangal is the planet of war. Thus, Mangal dosha is often associated with marital disharmony. It is also believed that if a normal person marries a Manglik, he or she may die very soon. Mangliks have marriage problems because their choice of spouse becomes limited. The concept of Mangal dosha is shrouded in misinformation and blind faith. That is why it is hard to decipher the truth from myths and maliciously evil customs. Here are some things that every Manglik person must know so that they are not lead astray by myths and rituals.

Why do Mangliks have marriage problems?

Mars is a planet that likes to stay alone, and thus it quarrels with whoever is closest to it. That is why, your ruling planet cannot stand your partner for long until and unless your horoscopes are compatible.

Age is a factor

For some people, the influence of Mars is valid only till a certain age. If they get married after this age, problems are not expected to creep up in their marital life. A late marriage is an option that many people opt for these days, so it is no big deal.

Even if you are a purna Manglik, your dosha can be remedied by the means of kumbh vivah. In this ritual, the person afflicted by Mangal dosha is first married to a banana or banyan tree. You can also wed a silver or gold statue of lord Krishna if you are girl. This negates the dosha from the person’s horoscope.

Hinduism lays great emphasis on good deeds. The goodness of your soul and your inner kindness can remedy a number of dosha in your horoscope. So if you are a honest and good soul, you will not suffer too much for your doshas.

If you are a Manglik, take it in your stride. It is not the end of world because you are what you believe you are.

1. Much ado about ‘Manglik Dosha’

Around 8000 Indians have signed up for the Mars One Mission which promises to establish a colony on Mars and migrate these aspirants there. So, what’s with our fixation with the planet Mars, or ‘Mangal’ as we famously know it…and how is it related to our married life? Let’s explore…
2. The dogma called ‘Manglik’

The term Manglik has occupied us as a society. So much so that matrimonials have created a special section for those seeking Manglik brides and grooms. It has the capability of giving sleepless nights and restless days to the parents of those with manglik dosha in their horoscope. It brings along a painful pursuit of astrologers leading to a vicious circle of rituals and rundown of faith.
3. What’s the big deal?

Mars is the planet of war and holds a special place in astrology. Manglik or Kuja dosha is considered as one of the most dreaded doshas in the horoscope and is one of the major deciding factors in Hindu marriages.
4. Who is a ‘Manglik’?

A person with Manglik dosha is simply one who has a strong presence of the planet Mars in their birth chart. Mangal dosha or Kuja dosha or Chovva dosham is the combination in the birth chart or horoscope where Mars or Mangal occupies the 1st, 4th, 7th, 8th, or 12th house.
5. Side-effects of being ‘Manglik’

A manglik marrying a non-manglik is considered disastrous which can even lead to death of one’s partner. This is one of the main reasons why many mangliks marry late – it takes them too long to find their perfect match. The theory of Mangal dosha is cloaked in half truths and blind faith. We need to decipher the truth from myths and evil customs.
6. Common perceptions about ‘Mangliks’

Mangliks are perceived to be polite, courageous, strong, sharp, focused, disciplined and have a fiery temperament. They are thought to emanate strong and powerful vibrations. Based on this principal, it is said that only another mangalik will be able cope better with the strong nature of their partner.
7. Common perceptions about Manglik dosha

Apart from the common belief that Manglik Dosha is a big bottle neck when it comes to marriage, there are other ideas related to it. One of them being that a Manglik person should marry only after 28 years because by that time the horrific effects of Mangal have condensed.
8. Historically speaking…

According to a research study by Jyotish Maharishi SP Gaur, there isn’t any significant mention of Manglisk Dosha in classical books. He concludes that Manglik Dosha is of subsequent origin. S.P Gaur supports his argument be stating that even if we refer to Ramayan, Mahabharat or Puranas, nowhere matching of charts before marriage was described as a condition for an arranged marriage, only auspicious Muhurta for marriage was given due importance.
9. Why Manglik Dosh applies only to Hindus?

Astrology is a science, which is applicable to all the animated and non animated objects. However, horoscope matching to determine doshas or compatibility is not a familiar practice in Western countries, but still there are huge numbers of successful marriages. Thus, it is safe to say that Manglik Dosh is connected to religion rather than astrology and is popular only with Hindus.
10. Manglik Myths

Myth: Born on Tuesday? You are definitely a Manglik! Many people misinterpret that if you were born on a Mangalvaar (Tuesday), you are a Manglik. However, this is not true.
11. Manglik Myths

Myth: Marry a tree and then your spouse. The concept behind this act is that all the alleged problems related to being a Manglik are attached to the first marriage only.
12. Manglik Myths

Myth: The marriage will end in a divorce. The success of any marriage depends on compatibility and understanding. Being a Manglik is not going to determine a marriage’s prolonged existence.
13. Manglik Myths

Myth: You can be a double, triple or quadrant Manglik. There are no such terms in Vedic astrology.
14. Kinds of Mangliks

Mangliks are of two kinds: Anshik (slightly) Manglik and Sampuurn (complete) Manglik. It is believed that an Anshik Mangalik can marry a Manglik as well as a non-Manglik however, a manglik should marry only a manglik.
15. Manglik Dosha remedies

Here’s a list of the most common remedies people undertake to get rid of the dosha… (Please note that this is just a list of some widely followed rituals. Proper and suitable remedy can only be advised by an astrologer)
16. Manglik Dosha remedies

A lot of devotees offer Sindoor (vermilion) to Lord Hanuman as he is considered as the ruler of Mars. Some people are also advised to throw Masoor lentils and Honey in running water or sleep on deer skin. Eating and drinking in silver utensils is also one of the remedies.
17. Manglik Dosha remedies

Reciting Gayatri Mantra, Hanuman Chalisa or Mahamrityunjaya mantra is said to help Mangliks. There are other Holy texts such as Angark Stotram and Bhoom Mangal Stotram that are recommended by many astrologers.
18. Manglik Dosha remedies

Some of the other well-known remedies include – worshipping Kesariya Ganapati (orange statue of Lord Ganesha), donating red clothes to the workers , keeping ivory at home and worshipping banyan tree with milk.
19. Is ‘Manglik Dosha’ worth the hullabaloo?

There is a lot more about Mangal Dosh than just its placement in 5 houses. It would be wise to think rationally and not fall prey to someone else’s ambitions in the name of religion.

Comments (3) on “Kumbh Vivah – An Indian Ritual For Manglik Dosh”