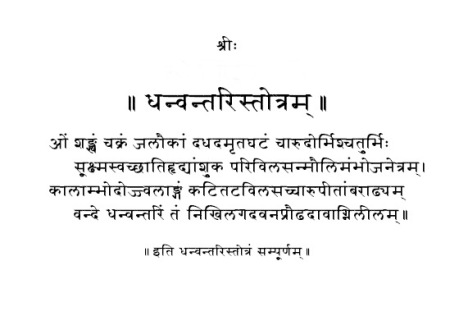 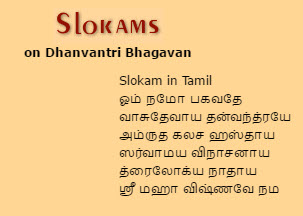 For Good Health – Chant Dhanvantari Mantras
Churning of the Ocean and Birth of Lord Dhanvantri
Are you experiencing a bad dasha or period in your horoscope?
Is your health condition often giving you cause for concern despite taking all precautions, exercise and medical care?
Are you having a day long fatigue feeling and tired of all tricks to get the energy back?
Are any of your dear and near ones suffering from continuous ill health?
If Yes , then try chanting these powerful Dhanvantari Mantras to keep illness at bay. Of course, it is always better to try something which has no ill effects on you and does not cost you any money…is it not…?!
There is no exercise involved in this. Only chanting the Mantra will improve your condition
Lord Dhanvantari

According to Shreemad Bhagwat and Sushrut Samhita , Lord Dhanvantari emerged from the ocean with a pot of Amrit when the ocean of milk was churned by Gods and demons for Amrita [nectar]. Goddess Mahalakshmi also re-born on the same day and therefore the birthdays of Goddess Lakshmi [Dhan Teras] and Lord Dhanvantari are celebrated on the same day. Lord Dhanvantari emerged out of the ocean holding Amrit Pot, Shankha, Chakra and Jalauka in his four hands. Lord Dhanvantari protects all living beings from diseases, untimely death and eliminates sorrows.
Practitioners of Ayurveda [the Indian traditional medicine] celebrate Dhanvantari Jayanti with much devotion. Devotees also make it a point to visit Lord Dhanwantari Temples to seek his blessings for good health.
DHANVANTARI MANTRA FOR GOOD HEALTH

There are no major permanent temples dedicated to Lord Dhanwantari in North India.
Chant these mantras 8,16,64 or 108 times based on your time availability. You may recite these mantras for the wel-being for anyone who is sick or ill.
May Lord Dhanwantari bestow good health, longevity and youthfulness to all of us.