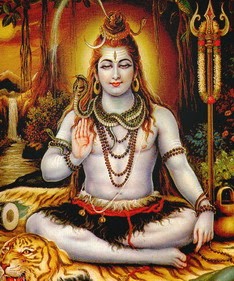 How merciful He is! How loving and kind He is! He even wears the skulls of His devotees as a garland around His neck. He is an embodiment of renunciation, mercy, love and wisdom. It is a mistake to say that He is the destroyer. Lord Siva in reality is the regenerator. Whenever one’s physical body becomes unfit for further evolution in this birth either by disease, old age or other causes, He at once removes this rotten physical sheath and gives a new, healthy, vigorous body for further quick evolution. He wants to take all His children to His lotus-feet quickly. He desires to give them His glorious ‘Siva-Pada’. It is easier to please Siva than Hari. A little Prem and devotion, a little chanting of His Panchakshara is quite sufficient to infuse delight in Siva. He gives boons to His devotees quite readily. How large is His heart! He gave Pasupatastra to Arjuna without difficulty for his little penance. He gave a precious boon to Bhasmasura. In Kalahasti near Tirupati, He gave Darsan to Kannappanayanar, the devoted hunter who plucked his two eyes to replace the weeping eyes in the Murti. In Chidambaram even the untouchable Pariah saint, Nandan had Darsan of Lord Siva. He ran with tremendous speed to make the boy Markandeya immortal, when he was in the clutches of the God of Death—Yama. Ravana of Lanka pleased Siva with his Sama chantings. He initiated the four virgin youths Sanaka, Sanandana, Sanatana and Sanatkumara into the mysteries of Jnana in the form of Guru Dakshinamurti. In Madurai, in Southern India, Sundaresvara (Lord Siva) assumed the form of a boy and carried earth on His head for a devoted lady for the sake of Puttu (a kind of sweetmeat) as wages, when an anicut was erected in the Vaigai river. Look at the unbounded mercy for His devotees! When Lord Brahma and Lord Vishnu went to find out the head and feet of Lord Siva, He assumed an infinite, expansive blaze of light (Jyotirmaya-Svarupa). They were baffled in their attempts. How magnanimous and self-effulgent He is! He lived in the house of Pattinattu Swami in Southern India for several years, as his adopted son and disappeared after giving him the small note: “Even a broken needle will not follow you after your death”. The reading of this note was the starting point for attainment of Jnana for Pattinattu Swami. Why not you attempt this very second with sincerity to realise God (Lord Siva)?

Hatha Yogins awaken the Kundalini Sakti that is lying dormant in the Muladhara Chakra by Asana, Pranayama, Kumbhaka, Mudra and Bandha, take it above through different Chakras (centres of spiritual energy)—Svadhishthana, Manipura, Anahata, Visuddha and Ajna—and join it with Lord Siva at the Sahasrara, the thousand-petalled lotus at the crown of the head. They drink the nectar of Immortality (Siva-Jnana-Amritam). This is termed Amritasrava. When the Sakti is united with Siva, full illumination comes for the Yogi.

Lord Siva represents the destructive aspect of Brahman. That portion of Brahman that is enveloped by Tamo-Guna-Pradhana-Maya is Lord Siva who is the all-pervading Isvara and who also dwells in Mount Kailas. He is the Bhandar or storehouse of Wisdom. Siva minus Parvati, Kali or Durga is pure Nirguna Brahman. With Maya (Parvati) He becomes the Saguna Brahman for the purpose of pious devotion of His devotees. Devotees of Rama must worship Lord Siva also. Rama Himself worshipped Lord Siva at the famous Ramesvaram. Lord Siva is the Lord of Ascetics and Lord of Yogins robed in space (Digambara).

The wearing of the crescent moon on His head indicates that He has controlled the mind perfectly. The flow of the Ganga represents the nectar of immortality. Elephant represents symbolically the Vritti, pride. Wearing the skin of the elephant denotes that He has controlled pride. Tiger represents lust. His sitting on the tiger’s skin indicates that He has conquered lust. His holding deer on one hand indicates that He has removed the Chanchalata (tossing) of the mind. Deer jumps from one place to another swiftly. The mind also jumps from one object to another. His wearing of serpents around the neck denotes wisdom and eternity. Serpents live for a large number of years. He is Trilochana, the three-eyed One, in the centre of whose forehead is the third eye, the eye of wisdom. Nandi, the bull that sits in front of Sivalinga, represents Pranava (Omkara). The Linga represents Advaita. It points out “I am one without a second—Ekameva Advitiyam.” Just as a man raises his right hand above his head, pointing out his right index-finger only.

Kailas hills in Tibet are a huge range with a central, beautiful, naturally carved and decorated shining peak, eternally clad with silvery snow, 22,280 feet above sea-level. Some take the height to be 22,028 feet. This particular peak is in the form of a natural, huge Siva Linga (Virat form). This is worshipped as the form of Lord Siva from a distance. There is neither a temple, nor a Pujari, nor a daily Puja there. I had the fortune to have Darsana of Kailas through the grace of Lord Siva, on July 22, 1931. I even climbed with panting breath to the foot of Kailas peak where the Indus takes its origin. It is a very picturesque, soul-stirring scenery. You will have to ascend from Didipha Guha, the first halting stage in Parikrama of Kailas. The Indus gushes out as a small streamlet through blocks of ice from behind the back portion of Kailas peak. Though in the pictures of Lord Siva it is shown that the Ganga flows from His head, it is really the Indus (Sindhu) that takes its origin from the head of Siva (Kailas) in the physical plane. Parikrama of Kailas covers 30 miles. It takes three days. On the way comes the famous and sacred Gauri Kund which is eternally covered with snow. You will have to break the snow when you take a bath.

The Name of Lord Siva chanted in any way, correctly or incorrectly, knowingly or unknowingly, carefully or carelessly, is sure to give the desired result. The glory of the Name of Lord Siva cannot be established through reasoning and intellect. It can certainly be experienced or realised only through devotion, faith and constant repetition of the Name and singing His hymns with Bhava. Every Name is filled with countless potencies or Saktis. The power of the Name is ineffable. Its glory is indescribable. The efficiency and inherent Sakti of the Name of Lord Siva are unfathomable.

The mind is purified by constant repetition of Siva-Stotra and Names of Lord Siva. The Stotras are filled with good and pure thoughts. Repetition of the hymns to Siva strengthens the good Samskaras. “As a man thinks, that he becomes”. This is the psychological law. The mind of a man who trains himself in thinking good, holy thoughts, develops a tendency to think of good thoughts. His character is moulded and transformed by continued good thought. When the mind thinks of the image of the Lord during singing His hymns, the mental substance actually assumes the form of the image of the Lord. The impression of the object thought of is left in the mind. This is called Samskara. When the act is repeated very often, the Samskaras gain strength by repetition, and a tendency or habit is formed in the mind. He who entertains thoughts of Divinity, becomes transformed actually into the Divinity himself by constant thinking. His Bhava or disposition is purified and divinised. When one sings the hymns of Lord Siva, he is in tune with the Lord. The individual mind melts in the cosmic mind. He who sings the hymns becomes one with Lord Siva.

Just as fire has the natural property of burning inflammable things, so also the Name of Lord Siva has the power of burning the sins, Samskaras and Vasanas and bestowing eternal bliss and everlasting peace on those who repeat the Name of the Lord.

O friends! Take refuge in the Name of Siva. Sing His hymns. Nami and Name are inseparable. Sing Lord Siva’s hymns incessantly. Remember the Name of the Lord with every incoming and outgoing breath. In this Iron Age, Nama-Smarana or singing the hymns is the easiest, quickest, safest and surest way to reach God and attain Immortality and perennial joy. Glory to Lord Siva! Glory to His Name!!

Ravana propitiated Lord Siva by his hymns. Pushpadanta pleased Lord Siva by his celebrated Stotra—Siva Mahimna Stotra, which is even now sung by all devotees of Siva throughout India, and obtained all Aisvarya or Siddhis and Mukti. The glory of the Stotras of Siva is indescribable. You must all sing the hymns of Lord Siva and obtain His grace and salvation, not in the unknown future, but right now in this very second. You can please Lord Siva easily. Fast on the Sivaratri day. If you cannot do this, take milk and fruits. Keep perfect vigil the whole night and sing His Stotras, and repeat ‘Om Namah Sivaya’. May the blessings of Lord Siva be upon you all!