How this young monk pulls off the great memory trick
17-Year-Old Jain Ascetic Will Face 200 Random Questions At One Go. He Will Recall & Answer Them Sequentially 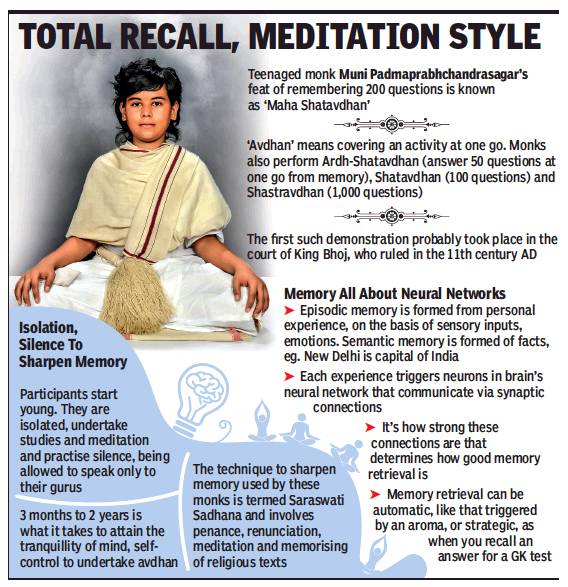 On September 2, Muni Padmaprabhchandrasagar, a 17-year-old Jain monk, will show off a feat of memory. He will take 200 questions at a go and answer them in the same order at Palace Grounds in Bengaluru. To show that no challenge is too daunting for his prodigious memory, he will allow people to throw questions randomly from the lot of 200 — say, question number 44 or 67.

In Jain parlance, the young monk will become ‘maha shatavdhani’, one who can store and retrieve 200 nuggets of knowledge on a range of subjects from shlokas and mathematical equations to synonyms and antonyms, and foreign phrases. Experts said ‘avdhan’ is the process of having the attention span to carry out an entire activity. ‘Shatavdhani’ is a person who can recall 100 things at a go.

Padmaprabhchandrasagar, who performed ‘shatavdhan’ in 2014 in Mumbai, is one of the three disciples of Acharya Nayachandrasagarji, and has studied till Class 8. Normally, the demonstration involves monks being asked to answer questions, do calculations, sing a raga, remember foreign phrases, etc. Throughout the event, loud music is played to distract them.

“Monks becoming shatavdhani is rare,” said Nayachandrasagarji. “Rigorous training builds a tranquil mind. Three disciples achieving this feat underscores the fact that great memory does not have to be a gift one is born with.”

He is working with 35,000 children through Saraswati Sadhana Research Foundation to enhance their memory power. The foundation also draws civil service aspirants, primarily from Mumbai.

Ahmedabad-based neurologist Dr Sudhir Shah said the formation of memory is complex. “It is possible that the monks can convert working memory — lasting 30 seconds in a normal person — into long-term as the training probably allows the formation of stronger neural networks for better storage and retrieval,” he said.

“The monks used techniques like silence and meditation to increase their attention span. This has opened a new avenue for research on how our brain functions and how we store and retrieve memories,” Shah added.

Dr Paresh Doshi, director of neurosurgery at Mumbai’s Jaslok Hospital, studied 104 of the foundation’s students to test their methods. “The results showed that working memory and attention had improved in children who had undergone training. Their long-term memory did not show much change,” he said. “The results were encouraging and merit a more detailed study.”

Dr S L Vaya, a forensic psychologist who has conducted psychological tests on accused in a number of highprofile cases to retrieve information, said the brain stores information as an amalgamation of different factors. “What we learn by rote, such as multiplication tables, is stored differently from a personal experience,” she said. “For feats of memory retrieval, the neural connection has to be strong.”