“Whenever Dharma, or the situation of law and order, is endangered on this world, I shall incarnate onto this world to re-establish Dharma, law and order and to protect the good people and to destroy the evil elements of the society….Lord Vishnu. 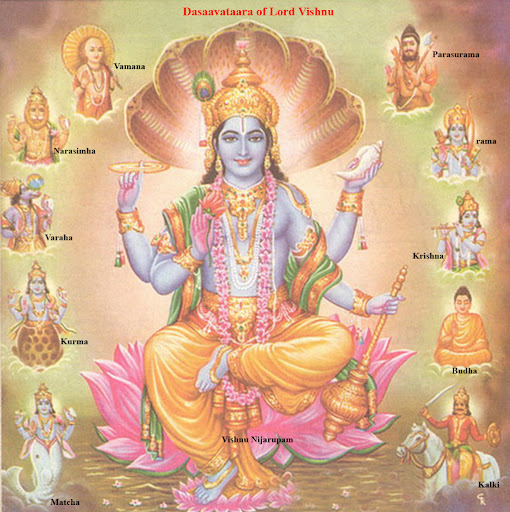 Why Avatars ? – Why not God just appear on this planet and preach what He has to preach or better still why not just restore the right order (like magic), why go through all this effort? Good question…Here is my answer –

When in Avatar, God is like one of us….He is born on this planet, he grows up here and then when the time is right imparts His knowledge upon us. It is always easier to understand and appreciate someone who is one of us, someone who is among us – Its like when as a parent you are trying to teach good things in life to your child, the best way to do this is by example – by living a good life.

It is believed that Lord Vishnu has incarnated himself many times. But its ten of his avatars which has had the maximum effect on human life and these ten avatars are called – ‘Dasha Avatar’ (’Dasha’ means ten in Sanskrit). The ten avatars are:

It can also be said that these avatars represent evolution of human life on earth. This is what the top six avatars mean