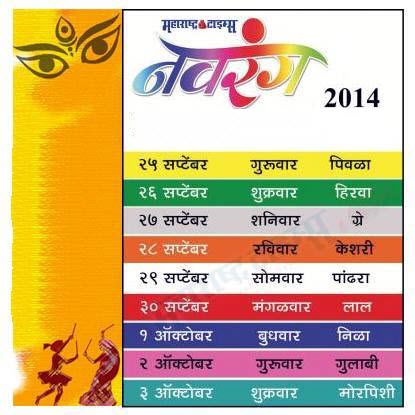 This year the first day of Navratri festival lands on 25th September 2014 bringing the first color of season YELLOW. Following Dwitiya, the ‘Chandra Darshan’ on 26th, second day bring you the Eco Friendly GREEN Color. Tritiya, which mean the 3rd day coming on 27th bring the color GREY which is a combination of Color Black and White. On 28th of September is Chaturthi which is 4th Day with radiating color ORANGE. Next is Panchami, the 5th Day on 29th which this year can be shown as the most peaceful day if you wear your dress with color WHITE. Shashthi, the 6th Day on 30th makes few females happy who loves their dress color to be RED. Saptami, the 7th day is on 1st Of October and girls / women can be seen around Mumbai in trains ladies compartment and offices wearing ROYAL BLUE Color dress, this is one of the beautiful colors most suited on fair skin. 2nd October is Durga Astami, the Saraswati Puja day and color of the day is PINK (This can be dark or baby pink). The 9th day of Navratri in Mumbai i.e Navami is considered the last day to dance and enjoy. Those females who are able to adjust which office hours will leave early to enjoy the Garbas and Dandiya ras till late night wearing color PURPLE, which will be color of last day. Finally on 4th October is Vijaya Dashami and this day has no special color, Still we can see our city en lighted with multi-color wears. The Navratri festival and Durga Puja is dedicated to worshipping Goddess Durga or her avatars and celebrated all round the globe. Navratri 2014 begins on September 25 and this festival is celebrated for nine nights and most importantly nine forms of the Devi are worshipped.

On Navratri, each Goddess of Navadurga is worshipped and puja begins with Shailputri Maa and ends with Siddhidhatri Mata. Dussehra falls on the 10th day and is celebrated with great zeal and enthusiasm. Diwali, the festival of lights, is celebrated 20 days after Dussehra. Every year on Navratri eve, devotees are excited to know the list of nine different colours that they are supposed to wear on each day of the festival. We provide you a list of the nine colours of Navratri 2014 to be worn by devotees as well as Goddess Durga with their significance:

Shailaputri Maa is the first amongst Navadurga which is worshipped. On the first day of Navratri, this Goddess is dressed in a ‘Grey‘ saree and on Ghatasthapana which is done that is installation of earthen pot. The colour to wear on the first day for devotees is ‘Yellow‘.

Bharmacharini is the second form of mother goddess which is worshipped on the second day. It is believed that this goddess enlightens elegant forms with great power, divine and spiritual grace. The goddess is dressed in ‘Orange’ attire. The colour of the day for devotees to wear on this auspicious day is ‘Green‘.

Chandraghanta is the third appearance of the goddess who symbolises peace, serenity, beauty and bravery in one’s life. She is decorated with a ‘White‘ saree and on the third day of Navratri. Aswayuja Shukla Thadiya is done that is Gauri Vrata. Sindhoor Tritiya Sowbhagya Teej is observed on this day. ‘Grey‘ is the colour of the day for devotees.

Kushmanda is the fourth form of goddess that is worshipped on the fourth day of Navratri. She is mainly considered as the creator of the universe. Mother goddess is drape with ‘Red‘ coloured saree and on this day Bhouma Chaturthi is followed. The colour for the fourth day is ‘Orange‘.

Skandamata is a face of Maa Durga always known for demolishing the demons. She is dressed in a ‘Blue’ saree and on this day and the Upang Lalitha Gauri Vrata is observed. On the fifth day of Navratri that is known as Panchami, devotees are supposed to wear ‘White’.

Kaalratri is the seventh figure of Goddess Durga and is supposed to protect all her devotees from trouble and evil and grant them with freedom and happiness. The goddess on this day is supposed to be adorned with a ‘Green‘ coloured saree. Maha Saptami is the beginning of Utsava Puja and the colour of the day must be ‘Blue‘ for devotees.

Maha Gauri is worshipped on the eighth day and is regarded for forgiving her devotees’ sins and helping them to get purified. the goddess is dressed in ‘Peacock Green‘ colour on Durga Ashtami. On this day, Saraswati Mata Puja is done whole-heartedly and ‘Pink‘ is regarded as the colour of the day for all.

Siddhidatri is the form of Maa Durga for the ninth day of Navratri and is known to have great supernatural powers. This miraculous goddess is dressed in ‘Purple‘ attire and Maha Navami puja is done. Kanya puja is also done on this auspicious day, giving importance to females. ‘Purple‘ is the colour of the day for ardent devotees as well. This year, Navami and Dashmi / Dussehra fall on the same day that is October 3.