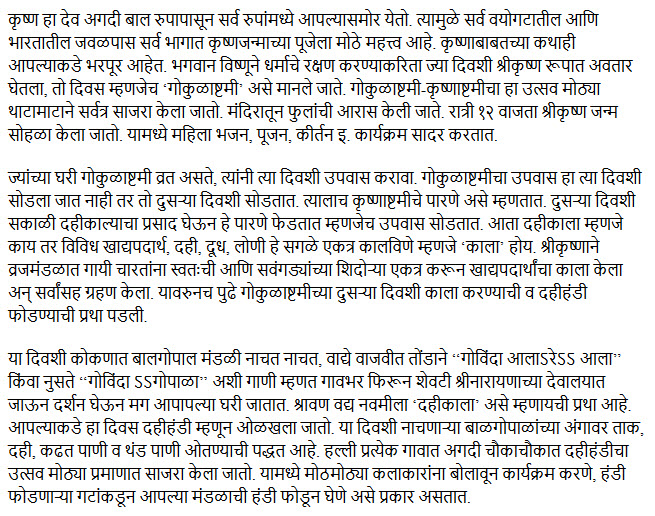 Krishna comes in front of you as a child with all forms. Therefore, the worship of Krishna Jannama is of great importance in all ages and almost all parts of India. You have a lot of stories about Krishna too. The day Lord Vishnu took the form of Lord Krishna towards protecting religion, that day is considered to be ‘Gokulashtami’. This festival of Gokulashtami-Krishnashtami is celebrated everywhere in a big way. Flowers are decorated in the temple. At 12 o’clock, Lord Krishna’s birth ceremony is celebrated. This includes women’s hymns, worship, kirtan etc. The programs are presented.

Those who are fasting in Gokulashtami, they should fast on that day. Fasting of Gokulashtami is not left on that day, but it will leave the next day. He is said to be the crane of Krishnachthami. The next morning, the devotees of Dahyakalya pay the prasada ie fasting that means fasting. Now what is the curd, what is the combination of different food items, yogurt, milk and butter? Shrikrishna gathered his own shawdas in the cows for the cows and took the food and took it with them all. On the second day of Gokulashtami, the practice of blackening and smashing of Dahi Handi fell on the next day.

On this day, the Balgopal chalan danced in dance during the dance, playing songs like “Govinda Alare came” or simply “Govinda Gopalala”, went to the shrine and finally went to the shrine of Srinarayana and went to their own home and went to their homes. Shravan Vadhi Navami is a custom to say ‘Dahikaka’. You have known this day as Dahihandi. On this day, the dancers have a method of pouring water, water, and cold water in the milk. At present, the festival of Dahihandi is celebrated in the chawl of every village. In this, calling big artists is a type of program, to break the hands of the boards from the boards.

Gokulashtami, which is celebrated in many states of India every year, is commemorating Krishna’s birthplace. This day is known as Gokulashtami, because of Shrikrushna being born in Gokul, in the bamboo ridge when Ashtami was born in Rohini Nakshatra. This day is celebrated with great enthusiasm and joy. On this day various edible curd, milk, butter and butter are “black” together. This is what it is called as a beard. It is believed that Shrikrushna was a favorite food. Therefore, Krishnan is deprived of Kalycha’s request.

Shrikrishna was born in a rich house, and he got involved in poor, day-to-day children. When these children were not getting milk and yogurt, Shrikrishna gathered and consumed the poison of his and all the lovers and then blackened them. Shrikrishna did not discriminate between the poor, the rich or the high-low. His love for Arjuna was as much as his love for Sudamya. From this point it shows its behavior to be integrated with society.

The devotees fast for the Ashtami and leave for Navami. Dahi Handi is celebrated on this day and the small and the big children from the particular area boil the Dahihandi by making a dash. People fill households with water jugs and pour water on them. The children who use it in physical clemency, give us the importance of sports, physical skills, ie health. Shrikrishna was an advocate for sports such as Dahihandi, Vitidandu and Mallukuthi. All of these Indian sports were spread to ordinary people due to Shrikrushna. Besides, Shrikrushna has told you the importance of Karma through the Gita. Do not blame your duty to the community. The whole life of Shrikrushna has remained a model for the society. Since some of his qualities can be practiced, it is believed that his life will be well made and therefore his mind is worshiped.

Gokulashtami, which is celebrated in many states of India every year, is commemorating Krishna’s birthplace. This day is known as ‘Gokulashtami’ because of Shrikrishna’s birth in Ashtamini Rani Nini, in Kanyakan Bandheyal, Gokul. This day is celebrated with great enthusiasm and joy. Therefore, the significance of this day has also been highlighted by some Bollywood songs. In particular, these songs are performed everywhere and every year they take great contracts with these songs.

1. Gone Shore All Cities Re –
The song ‘Mach Gaya Shor Sari Nagari’ in ‘Khuddar’ is played today even today. Big B, Amitabh Bachchan has given the contract in this song, which is still being held in the mind of the audience.

2. Big Krishna is Kanhaiya –
The song ‘Bada Natathat hai Ye Krishna Kanhaiya’ is one of the most popular songs in the film ‘Amar Prem’, which was released in 1972. Actor Sharmila Tagore and Rajesh Khanna have appeared in this film. This song is sung by Lata Mangeshkar, and it is also included in Gokulashtami’s top song today.

3. Go Go Go Govinda –
This is a song that attracts the youth of today and is one of the songs near them. The song, which was shot on actress Sonakshi Sinha and Prabhudeva, is from the film ‘Oh My God’.

4. Govinda aala Re –
The song “Bluffmaster” was released in 1963, while actor Shammi Kapoor sang on this song. After the song takes place today, the excitement of youth is lost.

5. Chandi ki dal par sone ka mor,
The song that will be taken for the sake of Gokulashtami, means ‘gold peacock on silver put’ in the film ‘Hello Brother’. Actor Salman Khan is pictured on the song ‘Hello Brother’ in 1999, along with actress Rani Mukherjee is also involved.